Fourth Graders Take a Trip Down Under – Washington Elementary

“Kangaroos, beaches, sharks, deserts, heat, dangerous snakes, and koalas.” Those are the words students came up with to describe Australia on Wednesday, January 26th, in the classroom of Enes Kaplanovic. Kaplanovic, known as Mr. “K,” is a fourth grade teacher at Washington Elementary who also happens to be from Newcastle, Australia.

All fourth grade students at the school learned about the country down under from Kaplanovic during Australia Day, celebrated in the country on January 26th. According to the country’s official website, Australia Day is “a day to reflect, respect and celebrate the Australian spirit and the best of this country.”

Kaplanovic dressed for the part – in “boardies,” which are Australian shorts with a beachy print, a shirt from a well-known store called Bunnings Trade, and a hat that would be worn in the Australian outback. He talked to students about the geography, history, language, and food of his native country, sharing that the Aboriginals are the world’s oldest living civilization, inhabiting the continent for about 60,000 years. After showing a photo of a great white shark in the waters near his hometown, a student asked if it was scary swimming there, and Kaplanovic said, “no, I didn’t think about sharks while growing up there.”

What did Mr. K want to accomplish with his knowledge sharing? “Well, I think some people tend not to know much knowledge about other countries, their peoples and their customs. As a teacher, I want to instill different points of view, dispel stereotypical ideas about places and broaden experiences for all students.”

During the day, students were offered samples of two Australian foods – TimTams (chocolate cookies) and Vegemite (a paste made from brewer’s yeast). The cookies were a hit. The Vegemite – not so much. 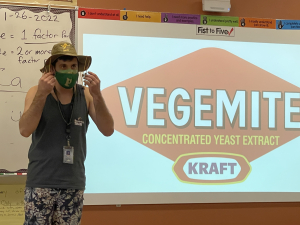 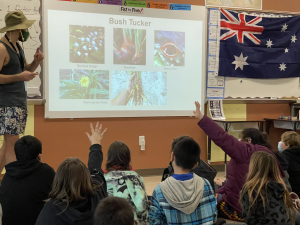 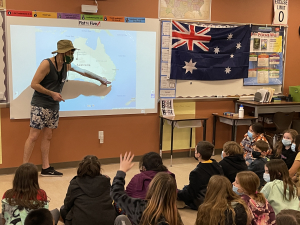 Thank you to PSD Board Member, Lynn Lieuallen

Notification of Intent to Award
Scroll to top