Most middle schools do not have their own fight song. But that didn’t deter Sunridge Middle School leaders and students – they just created their school’s first fight song. And like a good fight song, it’s pretty exciting!

The idea for a fight song came up when the school was brainstorming ways to honor a longtime teacher at SMS, David Payne. Payne was the middle school’s band teacher for more than 25 years. During his tenure, Payne inspired thousands of Pendleton youth to play a musical instrument and develop a deeper appreciation for music. He retired in June 2019 and tragically lost his battle with cancer in December 2020.

When Payne was a teacher, he taught his advanced band the fight song of the University of Michigan every year. Entitled “The Victors,” the song is the epitome of a good fight song – rousing, upbeat, with lots of brass instruments, definitely written and played to inspire. Payne used the song because he liked it himself, and it was a challenging but playable song for middle school musicians.

To honor Payne, the SMS Leadership Class, in cooperation with the school’s Music Department, created a fight song based on “The Victors” with school-specific lyrics for the big yellow school on the hill:

At the Pendleton School District School Board meeting on May 9th, the school board officially recognized the new SMS Fight Song. At the meeting, a choir quintet of SMS students (Jaden Atchley, Marilla Holden, Maura McShane, Lorelai Tesch, Claire Welch) sang the new song to keyboard accompaniment by Talan Anderson. The song will be officially dedicated to Mr. Payne by SMS at the school’s end-of-year assembly in June.

“The new song is a heartfelt and fun way to remember Mr. Payne, who made such a huge impact on so many students and music in general in our community,” said Principal Dave Williams. “It’s a great way to remember his tenure at SMS.”

Sunridge Middle School would like to thank the SMS Leadership Class Fight Song Committee of Talan Anderson, Maura McShane and Claire Welch, as well as Principal Williams and teachers Chris Demianew and Carly Elder, for all their efforts to bring this tribute together to honor David Payne. 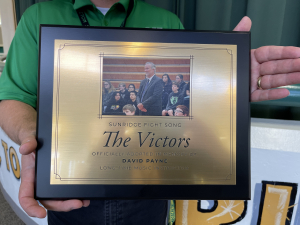