Most people, including teenagers, know that distracted driving is dangerous and that we shouldn’t do it, but when you hear Jacy Good’s story, you think about it a lot more seriously. Good suffered life-altering injuries in 2008 in a car accident that claimed the lives of both her parents. The car carrying Good and her parents was struck head-on by a tractor-trailer, which had swerved to avoid a car coming from the intersecting road driven by a man who attempted to turn left through a red light. That man was talking on his phone at the time.

Good and her husband, Steve Johnson, told their story to all the students at Pendleton High School on Thursday, December 1, 2022, in an assembly in Warberg Gym. Their message is that distracted driving of any kind takes lives. Through their Hang Up and Drive project, the married couple gives presentations around the county to educate people of all ages about the dangers of phone use behind the wheel. During the PHS presentation, Johnson said, “We know that crashes happen, and we know that people die in crashes, but these accidents affect people we know and love, and that is why we are here today.”

Good’s accident happened on the day of her college graduation near her hometown of Lancaster, Pennsylvania. She suffered injuries to her feet, leg, pelvis, arm, liver, lungs and brain and was given a 10% chance of survival right after the accident. After months of hospitalization and grueling therapy, she recovered but is still partially paralyzed on her left side. However, her resilient spirit was evident during the presentation as she talked about being grateful every morning.

Good and Johnson, who met and started dating in college and married in 2013, work together tirelessly to advocate for states to create stronger laws about distracted driving. They said that Oregon has pretty strict laws about cell phone use in cars – drivers under 18 years of age cannot legally use their phones in a vehicle at all, and drivers over 18 can use only hands-free devices. But Good and Johnson advocate for no cell phone use at all while driving, citing evidence that even hands-free talking, using your phone to play music and being tired are all dangerous while driving. “We encourage people to use the settings on their phones, so they don’t receive calls, texts and notifications and to put their cell phone away when behind the wheel. There is no safe way to use a phone while you are driving,” Good said.

Every day in the United States, nine people die in car accidents due to distracted driving, although the actual number is probably much higher, closer to 15 people per day, Good said. She encouraged teenage passengers to speak up when riding in a car with a distracted driver and for the passenger to be the designated texter, music DJ and navigator for the driver instead.

The couple has spoken at 1,370 events in 43 states and three countries. The Oregon Department of Transportation (ODOT) sponsored their presentation at PHS.

After a few questions from students in the assembly, Johnson left the students with these words, “We all have the power to make the right decision when we drive; it’s a choice. Make the better choice.” 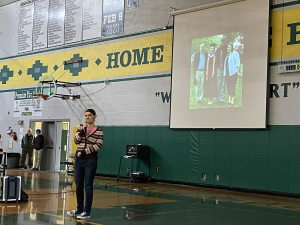 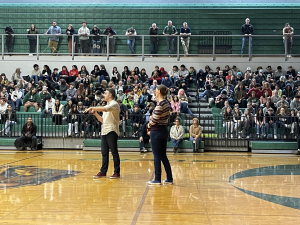 Letter to Families – Illness and Staying Home
Scroll to top