The planet Mars is millions of miles from Earth, but for Aaron Yazzie, a Mechanical Engineer at NASA, looking at the terrain of the red planet reminds him of the place he grew up. Yazzie is Dine’ (Navajo) and grew up in Holbrook, Arizona, a small community bordering the Navajo Nation in northern Arizona.

Yazzie gave a virtual presentation about his job and experiences at NASA to more than 150 fourth and fifth grade students at Washington Elementary School on Wednesday, November 17th. Among his first slides were photos showing his Navajo homeland – rocky mesas, rough canyons, and layers of sandstone – next to photos sent back to Earth from Mars. The photos showed very similar scenes. “I am very familiar with this type of landscape, buttes and sandstone and red ground,” Yazzie said.

At the NASA Jet Propulsion Laboratory in Pasadena, California, Yazzie designs mechanical systems for NASA’s robotic space research missions. His most recent project was on the Mars 2020 “Perseverance” Rover where he was the lead engineer for the Rover’s drill bits that the vehicle uses to search for ancient microbial life on Mars. During his virtual presentation to the students, he talked about the complex engineering and components that he and his team designed for the Perseverance, many made from titanium to withstand extreme temperatures of 81 degrees below zero on Mars.

The seven-feet- tall Rover has a long arm with a turret containing multiple tools like cameras and drill bits, which it uses to drill into rocks on the planet’s surface and retrieve cylinders of material it stores in tubes. These materials will eventually return to Earth so scientists can study them to learn more about Mars, as well as more about our own planet since both are terrestrial or rock planets with a core, mantle, and crust.

Millions of years ago, Mars contained a lot of water, so researchers and scientists are searching for fossils in large craters that used to be full of water. The Perseverance Rover was launched on July 30, 2020, during the height of the COVID-19 global pandemic. Yazzie said despite the circumstances here on Earth, the team had to adhere to the timeline when Earth and Mars are closest together in their orbits or they would have been required to wait two more years. After seven months of hurtling through space, the Rover landed on Mars on February 18, 2021. Since, then, the helicopter sent with the Rover has flown 14 times to gather videos, and many samples have been taken with the Rover’s multiple drill bits designed by Yazzie’s team. “To be able to work on something that is going to touch down on another planet is really cool and exciting. In my job, I don’t do the same things every day, so it never gets boring,” Yazzie said.

Shawndine Jones, Walk to Language Teacher at Washington Elementary, is a colleague and friend of Yazzie and arranged the virtual opportunity for students. The timing of the presentation was fortuitous – Washington fourth graders just read a unit about Mars and November is Native American Heritage Month. Yazzie said he is very grateful for his parents and great grandparents who stayed strong through difficult times to help him succeed. “I would not be here working at NASA if generations before me had not persevered to help me succeed.” 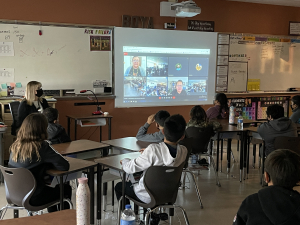 Giving Thanks at Pendleton High School

Giving Thanks at Hawthorne Alt School
Scroll to top